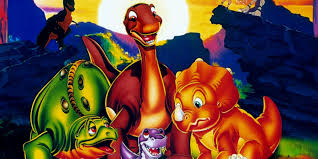 After the tragic death of his mother, Littlefoot joins a diverse group of young dinosaurs (Cera, Spike, Duckie, Petri) on a journey to find habitable land, known as the great valley. Simple, and overly sentimental at times, The Land Before Times is also beautifully animated and effective. I do wish the filmmakers had opted to go bigger in scope and live up to the potential of the film’s opener, which is epic and awesome. The characters are memorable, boosted by nostalgia (and a ridiculous amount of sequels). The score is wonderful, and turns into one of the film’s best assets.