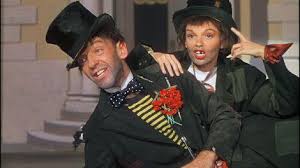 Two song and dance greats, Astaire and Garland, pair together and make an entertaining if not quite essential film musical. Astaire plays Don Hewes, a successful performer part of a winning duo with Nadine Hale (Miller), his dance partner and romantic flame. The two fall apart, however, when he discovers she’s in love with his best friend, and he vows he can take any girl to replace her, and be as successful, part of a pygmalion type wager he makes while drunk. As part of his bet, he takes on Hannah Brown (Garland), a dancer at some local dive. The Hewes-Brown partnership doesn’t take off until he lets her be herself instead of trying to emulate Nadine. The conflict and antagonism between Astaire and Garland’s character is tame to the point of being non-existent. I would have preferred some more push and pull before they end up together inevitably. Set just in New York just a few years before the first World War, the period costumes set design, along with the sparkling technicolor are spectacular. The songs and dance numbers, while being middle of the pack for Astaire and Garland and Irving Berlin (who wrote the music), are still head and shoulders above most musical numbers. And the age difference between the two stars doesn’t detract as much as it would under different circumstances, as she’s playing basically the lovestruck pupil.