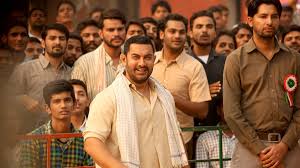 Feel good story about a disappointed former wrestler, Mahavir Phogat (Khan), who shifts his dreams from winning gold for India to having a son who wins gold. After trying for a son for years, Mahavir and his wife end up with four daughters, and his dreams seem to be over. Years later, with his peers calling him crazy, he instead trains his two oldest daughters in wrestling. It’s a great story told exceptionally well with Aamir Khan going to great lengths and succeeding in making his appearance authentic. Even more difficult is his ability to make this harsh, deeply flawed father sympathetic, and the actresses that play his daughters are excellent as well. The wrestling sequences are exhilarating. Much credit to the filmmakers and performers who made these scenes incredibly realistic.