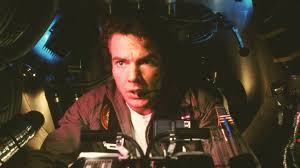 A hotshot marine officer, Lt. Tuck Pendleton (Quaid) is miniaturized for a government science experiment where he’s to be placed inside the body of a test rabbit, but, due to an attempt from rogue agents looking to steal the work, gets placed  inside the body of a hypochondriac named Jack (Short) instead. Jack and Tuck team up to return the latter to his normal size, as well as keep him out of the hands of mercenaries. Along the way, Jack becomes smitten with Tuck’s girlfriend, a reporter named Lydia (Ryan). Goofy, fast-paced with some excellently performed gags and stunts, Innerspace is more about the individual scenes than the picture itself. Promoted as a “what if” type picture wherein a Dean Martin type gets put inside the body and the head of a Jerry Lewis, they might have done well to push that idea further, but as it stands, Innerspace is a fine adventure.