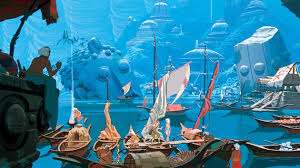 Milo Thatch (Fox) has always been considered crazy for believing that the lost empire of Atlantis exists. Then one day, he’s asked to meet Preston B. Whitemore, an eccentric millionaire who wants to fund an expedition and wants Milo to lead the way. Set in the 1910s, this is Disney animation’s first sci-fi flick. I think critics focused too hard on the flaws of this film and missed out on some of its greatness. No, it’s not a great film, but it is ambitious, gorgeous, innovative, and entertaining. The voice actors are fantastic. Michael J. Fox is always an engaging protagonist. Its flaw is the lack of character development. It carves out nice characters, but we don’t get enough time to care about them. I actually think it could have been interesting as Disney animation’s first epic, meaning longer than an hour and twenty minutes.