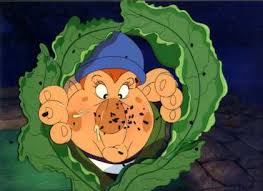 Don Bluth and his team of animators made such films as The Secret of NYMH (1982), The Land Before Time (1988), All Dogs Go to Heaven (1989), Anastasia (1997), but in the year 1994, they made two of the worst animated films ever to hit theaters. One is Thumbelina, and the other is A Troll in Central Park. Charming title aside, this animated flick about a loveable troll who has a sort of Midas touch with his “green thumb” (ideas about why this film was made begin to surface) is an hour’s worth of dullness. The troll gets banished from his world and needs the help of two children to return, but the “plot” is mostly just an excuse to have adorable moments with the kids and show the troll turn things into flowers with that green thumb. Children will probably enjoy this movie, I’ll give it that much, but it’s painful watching it as an adult.