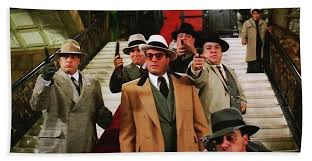 Elliot Ness is the man who took down Al Capone. He’s a legend. Brian De Palma and writer, David Mamet, expand the legend in their ultra-entertaining gangster flick, The Untouchables. Ness (Costner) assembles a ragtag crew of cops-the mentor Malone (Connery), young hotshot Stone (Garcia), and meek accountant Wallace (Martin Smith)-  to go after Capone (De Niro) and his crooked empire. It’s Wallace’s income-tax idea that ultimately gets the job done. The Untouchables takes several liberties with the story, and Connery takes considerable liberty with the Chicago Irishman accent. In fact, The Untouchables features just about every cop and gangster cliché you can think of. I say it works for that reason. It’s a fantastic piece of pop entertainment: thrilling, suspenseful, dramatic. I also see a lesson to be learned in Connery’s performance: making no attempt whatsoever to do a realistic accent is less distracting than doing a bad accent. So if you aren’t going to get the accent right (Keanu Reeves in Dracula), then you might as well not even try. I got over his Scottish accent pretty quickly, and he’s awfully charismatic.