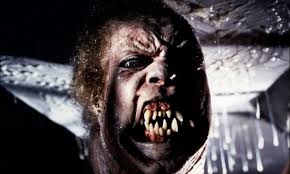 A group of scientists camped out and cut off from civilization in Antarctica discover an alien life form that’s able to multiply, duplicate, and replace human life forms. The men turn on each other as the alien monster picks them off one at a time (just how we horror fans like it). Heavily indebted to films like Alien (1979), Invasion of the Body Snatchers (1956/1978), and obviously The Thing From Another World (1951), I, nevertheless, believe that John Carpenter’s The Thing surpasses its influences. Pacing, payoff, special effects, atmosphere, are all in exceptional form here. All the lovely little gory details are inspired, and the soundtrack by Ennio Morricone (which somehow was nominated for a Razzie?) is terrifying.