12. Tangled (2010) The first Disney Princess film done in CGI rather than the traditional hand-drawn animation, this retelling of Rapunzel’s story set the new standard in a lot of ways. Ed Catmull, a big-time exec at Disney said it would be the last Princess movie done by the studio. Well, that didn’t last, and I suspect this film had a lot to do with it.

13. Hercules (1997) Following their success with Aladdin and The Little Mermaid, directors John Musker and Ron Clements turned their talent to Roman mythology. Featuring tons of clever jokes and an inspired villain-Hades is more like a malevolent car salesman than your usual run of the mill foe-Hercules is an excellent movie.

14. The Princess and the Frog (2009) A spectacular return to 2-d animation after CGI had become the norm, this Disney Princess tale, the first to star black leads, was not as well received as its predecessors. That’s a shame because it measures up in my opinion, and it stands as one of Disney’s very best visual achievements.

15. Meet the Robinsons (2007) Kind of slipped through the cracks of popular appeal, and critics were mostly indifferent towards it, but Meet the Robinsons cleverly navigates time paradoxes in a way children can understand and adults can still appreciate. It’s also noteworthy for being a rare positive vision of the future that contrasts the dozens of dystopian visions we get in film.

16. Treasure Planet (2002) 2-d animation was on the decline. Whether this film expedited this or fell victim to it I couldn’t say, but the characters are strong and the visuals are impressive.

20. Frozen (2013) Massive hit that focuses more on the relationship between sisters than on romance with the prince. It’s easy to be swept up in the global phenomenon this film became, whether positively or adversely, but this is one of Disney’s better films period.

21. Cinderella (1950) Saved the studio after it had fallen into a box-office funk, the titular character might be Disney’s most beloved.

22. The Black Cauldron (1985) Very underrated. There’s a lot that doesn’t work or isn’t satisfying, but I love cheesy fantasy films from the 80s. Gurgi is hilarious to me, and John Hurt makes the most out of a pretty basic villain. It’s a shame to think what could have been had they not fired a young Tim Burton from its production. 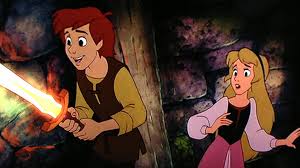