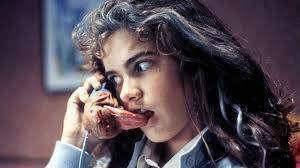 Tina Gray (Wyss) dies a horrific, bloody death under bizarre circumstances one night, with all signs pointing to her boyfriend as the culprit. Only her best friend, Nancy (Langenkamp), believes he’s innocent. She’s having odd nightmares featuring a scarred man with razors on his hands, and knows her friend’s death and these dreams must be related. It would be silly to quibble about reason and logic in a surrealistic film invoking dream-logic. What works are the impressive visuals and effects which have aged well, and the horror icon, Freddy Kruger himself, who’s hilarious and terrifying in equal measure (his licking Nancy through the telephone is a prime example of this).