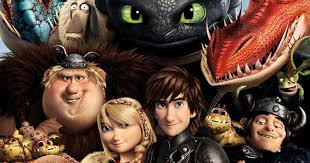 At some point, early on in the proceedings, I wondered when the plot would kick in, and How to Train Your Dragon 3 would get interesting. It never does. Hiccup returns, now leader of his pack of Vikings, along with Toothless, his dragon, and the beautiful Astrid by his side. A new dragon hunter, Grimmel the Grisly, is out to slay Toothless, having already killed off all other dragons of his breed. In response, Hiccup searches for the fabled hidden world, where the dragons and his people can live in peace, away from the surrounding strife.  This story proves leaden, with the filmmakers taking zero discernible risks. All that’s left for me to do is weigh the spectacular, often breath-taking visuals against the second-rate, disappointing story. As enchanting as the visuals are, they don’t overcome the dullness of watching a silent courtship between dragons, or the irritation of annoying side characters in the place of wit or good humor. I’ve sworn to never recommend a film in which I glance at my watch more than three times. I glanced at my watch more than three times watching How to Train Your Dragon: The Hidden World.