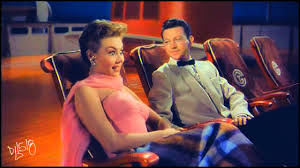 Young and old join forces when Bill Benson (Crosby) and Ted Adams (O’Connor) team up for an upcoming show. Everything is going well until both men cast their own girl as the leading lady. Ted finds french performer, Gaby, and Bill discovers American singer, Patsy. One of the women will have to go, but the matter is complicated when both men fall for the other’s girl. The plot’s not complicated enough, however, for my taste. There’s very little dramatic tension between the women or the men. I’d prefer there to be more antagonism between the core characters. The actors are all terrific performers. That goes without saying, so the film does have its moments of inspiration, including a dance sequence where O’Connor plays among a children’s daycare. With no buildup though, there’s no payoff in the end.