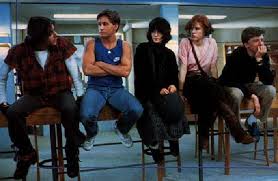 Realism dates. Think of films that are considered “realistic,” and then come back to them in 20 years time. The Breakfast Club isn’t realistic. It isn’t authentic in that way. It’s as dramatic and staged as any of the great ’50s melodramas. Five high school students, each a different stereotype, meet for Saturday detention with Assistant Principal Vernon (Gleason). There’s popular, rich girl Claire (Ringwald), jock Andrew (Estevez), nerd Brian (Michael Hall), weirdo Allison (Sheedy), and delinquent John (Nelson), who drives most of the dialogue. The Breakfast Club lasts because rather than resembling high school accurately in the 1980s, it hits at certain truths that are still true today. The cast is excellent. Each character has their moments, and I’m struck by how good each performance is. One thing that occurs to me is that The Breakfast Club really captures the insecurity of high school. The characters are playing a part at their school whether it be jock or geek. You see this in a scene where John and Andrew have a brief dust-up. John’s apparent confidence gives out for a moment and we can see him posturing. The film is also remarkably funny. John Hughes, may we never forget, was a tremendous writer.