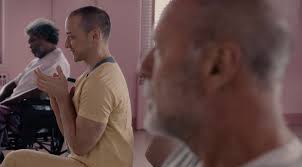 Here is a film that subverts all expectations, and, as a result, the critics have belittled it. It’s difficult to recommend Glass (which I do wholeheartedly), and support my reasons why, while avoiding spoilers.  Someone more adept could possibly, but I’m not even going to try. This review is laden with spoilers.

Glass is the third part in what director, M. Night Shyamalan, has called his Eastrail 177 trilogy, a conclusion to his stellar works: Unbreakable (2000) and Split (2016). Unbreakable featured a man, David Dunn (Willis, giving his career-best performance), who slowly realizes that he is superhuman. Split, starring James McAvoy as Kevin Wendell Crumb, was like a different side of the same coin. Kevin harbors 23 distinct personalities and has been considered insane his whole life. By the end of Split, Kevin discovered his own power, though it proved more destructive and malevolent than David’s. If you are like me, you’d assume that part three would be the epic showdown between David and Kevin, unbreakable versus defender of the broken, despite the film being called Glass, (a sinister character played by Samuel L. Jackson in the first part of the trilogy). Maybe that’s what critics assumed as well, and then felt disappointed, because Glass is not that film. It’s better. It’s deeper, more thoughtful, more surprising, more interesting. Glass is a film that I can come back to because it brings up more questions than it answers, the exact opposite of what final chapters typically do, which will frustrate many.

The first piece of the puzzle is Dr. Ellie Staple (Paulson).  I would argue that she is the actual main character in the film, and, it’s close, but I would guess that she has the most run-time. Just when Glass sets down to deliver what we had hoped for: a collision between two powerful forces, David and Kevin, Shyamalan pulls the rug out. Dr. Ellie Staple, inexplicably sharp and prepared to handle these powerful men, captures them, and the rest of the film takes place in an elaborate asylum. The doctor doesn’t believe in superheroes. She’s a pragmatist and would have David, Kevin, and Mr. Glass, or Elijah, already captured at the conclusion of Unbreakable, believe that they are simply ordinary men, suffering from delusions of grandeur. It’s almost the reverse of their standalone films where David and Kevin begin to believe that they’re special.

Mr. Glass, silent for a majority of the film, and as sinister as ever, is revealed to be a great force in his own right. In fact, he proves to be the predominate figure over the entire trilogy, and of Kevin and David’s lives. The three characters’ story reminds me of Preacher Harry Powell’s love versus hate dynamic tattooed to his hands in Night of the Hunter, or better yet, yin and yang. Mr. Glass created David and Kevin, and the two are inseparable contradictions. Add to this, the film climaxes on a twist that changes everything. Dr. Ellie Staple reveals herself to be part of an organization of equalizers, men and women who hide and destroy those with superpowers. They consider it unhealthy to the balance of the world to have superhumans. This makes her, in my mind, bonded with Elijah. Just as there’s a yin and yang dichotomy between David and Kevin, there exists one between her and Elijah as well. She aims to cover up the existence of superhumans. Elijah plots to reveal.

Shyamalan’s emphasis on duality continues in the cast of supporting characters who function as sidekicks in some ways. David has his son, Joseph, Kevin has Casey, a teenage girl once a victim of his, who formed a bond of understanding with him in Split, and Elijah has his mother. Aside from Joseph, they don’t resemble typical sidekicks, but they do enable the protagonists in some way or another: understanding for Kevin, encouragement for Elijah, hero-worship for David.

The final act is generally the point in most superhero flicks where I grow bored. Think of Marvel films. The climax is where the wit and banter disappear, the actors fade into the background, and expensive special effects take over. Consider Glass, a film in which the final act is when everything becomes less clear and more puzzling. It’s the point that most critics signal as Glass’ undoing. I think it will be a subject of discussion for years to come.