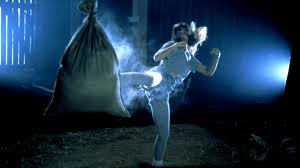 Not quite as bad as I imagined it would be, The Next Karate Kid is mainly just completely unnecessary. Daniel LaRusso has moved on, and this time around, the legendary Mr. Miyagi (Morita) teaches the troubled, rebellious, Julie Pierce (Swank).  Swank is an engaging heroine, and Mr. Miyagi is an all-time great film character, but this story is awfully small, and the filmmakers attempt to make up for it with trumped up drama (the bullying borders on sexual assault) and silly training scenes (one especially dumb one involves Julie babysitting). They also turn Mr. Miyagi into whatever the equivalent of “the magic negro” is for Asian people.  It’s entertaining for most of its run-time, but can’t overcome the dumb moments, or the incredibly weak ending.