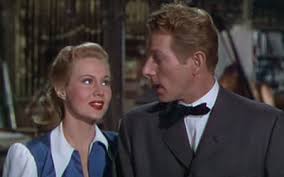 Howard Hawks remakes one of his own films, Ball of Fire, this time around featuring Danny Kaye as the square professor and Virginia Mayo as the conniving nightclub singer working him over. She needs to hide out for a few days while her boyfriend, gangster Tony Crow, flees from the cops, eventually finding her way to a house of music professors. Originally written by Billy Wilder, Ball of Fire is superior, but Kaye and Mayo make for a good time. Hawks reins in Kaye’s performance a bit, and it works well for the film. The best part about A Song is Born is the bevvy of cameos from music’s biggest stars of the day: Louis Armstrong, the Dorsey brothers, Benny Carter, Lionel Hampton, and others.