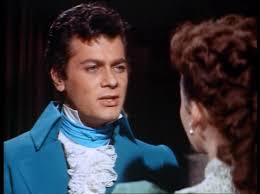 The model gets used over and over again, and I would guess it started with the Scarlet Pimpernel. The wealthy hero acts like a cad in his public life, but secretly fights for the powerless people in disguise. Zorro does this. Batman does this. I’d never heard of the Purple Mask, but he, as portrayed by Tony Curtis, is a hero in the same mold. Set during France’s reign of terror, Rene de Traviere, or the Purple Mask, fights on behalf of royalists being executed without fair trial as Napoleon rules.  Pretending to be an ignorant dandy, Rene is recruited by rebel royalists (not knowing his secret identity and thinking him disposable) to undertake a suicide mission. Zorro, Batman, the Scarlet Pimpernel, the Purple Mask, whoever, this story is always entertaining. Tony Curtis plays the part well, though the film is short and all too brief.