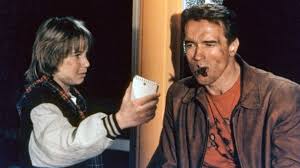 Danny Madigan (O’Brien), is having a tough time in life. His father’s died, his neighborhood is rough, and he can’t seem to concentrate in school. His one escape is the movie theater, where he enjoys the action packed movies of Arnold Schwarzenegger (playing himself), and the company of Nick (Prosky), an older projectionist. One day at the theater, while watching Schwarzenegger’s latest, Jack Slater IV, Danny gets warped into the picture, and teams up with Jack Slater himself to take down the bad guys. Last Action Hero is action-packed, yes, but more amusingly, it’s packed with in-jokes, meta-humor, and cameos. Considered a dud at its release, I think action fans will love it. Schwarzenegger, as a character that knows he’s a character in a movie, is a blast. This is one of his best vehicles. The film blossoms from the question of what it is that brings people to the movies, specifically action flicks, and why they’re more meaningful than given credit for. As someone who escapes into movies similar to Danny, the film speaks to me.