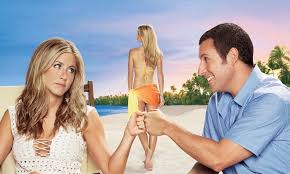 Puerile remake of Cactus Flower (1969) it may be, Just Go With It nevertheless entertains as a light romantic comedy. Daniel Maccabee (Sandler), a wealthy plastic surgeon, is a middle aged player. He tells his conquests that he’s married as a ploy, but it comes back to bite him when he falls in love with the young, stunning Palmer (Decker). He responds with a half-baked idea involving his devoted assistant, Katherine Murphy (Aniston), her two kids, his best friend, Eddie (Swardson), and a trip to Hawaii. The hallmarks of an Adam Sandler movie have been consistent for twenty years now: affable leads, sweet and cutesy moments, absurd silliness. He hasn’t made an outright hilarious movie in a long time. Every once and a while, he can still make an enjoyable film like Just Go With It, that benefits from its two stars chemistry (something that was missing from Cactus Flower despite that film’s superior quality), and the appealing location.