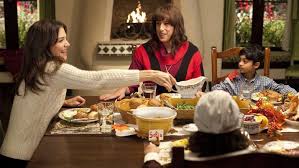 Adam Sandler plays Jack Sadelstein, a wealthy, accomplished advertisement executive, and unfortunately for comedy, he also plays Jill Sadelstein, Jack’s annoying, obnoxious, twin sibling visiting for the holiday season. Sandler’s Jill makes me appreciate the greatness of the late John Candy, who had a knack for playing annoying characters, but gave them depth and made them redeemable. Jill makes you want to turn off the movie. I’m not one of Sandler’s critics. I enjoy a solid portion of his filmography. Even this film, as bad as it is, isn’t quite as horrible as its reputation. I laughed something like once every 25th joke, but I did laugh. Al Pacino’s supporting performance as himself elevates the entire movie a full letter grade in my book. Pacino hasn’t done many comedies. He goes for it in this film, and is genuinely funny. I admire his full speed ahead turn despite his dismal surroundings. It’s bizarrely wonderful.