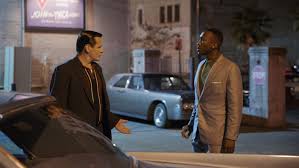 I resist the best I can the sort of made-to-be-inspiring , “based on a true story,” flicks that the Oscars and other award shows love. Everyone once in a while, a film such as Green Book slips past my defenses. It stars Viggo Mortensen as a bit of a meathead bouncer named Tony Lip, a New York Italian, who becomes a bodyguard/ driver for black pianist Don Shirley (Ali), making a tour across America’s deep south. The humor comes fast and frequent. Mortensen, impressive in a rare comedic role, makes Tony Lip, a caricaturesque personality, human and likable, while Ali shows a deep sense of dignity in his portrayal of Don Shirley at all times. The film is a blast because of its leads. You can complain about historical accuracy or contrived Hollywood happy endings, or whatever, but this is a film that you’ll enjoy.