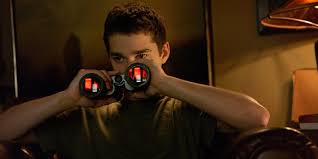 This film has no deeper qualities beyond its appeal as a suburban thriller. It doesn’t have any large-scale ambitions or notions of being great popular art like its predecessor, Alfred Hitchcock’s classic, Rear Window, starring James Stewart and Grace Kelly.  That film featured a recently handicapped Stewart, laid up in his urban apartment, forced into the role of peeping Tom, watching his neighbors as he grows to suspect one of them of being a killer. Disturbia, released over fifty years later, updates this premise, making its protagonist, Kale Brecht (LaBeouf), a delinquent youth on house arrest in some Californian suburb. This reworking of the plot proves to be a lot of fun, and the movie even throws in a little teen romance to boot, overcoming its one flaw: the utter uselessness and stupidity of the adults.