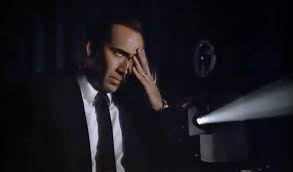 Not to everyone’s taste is the polite way of saying it, 8mm is, for me, trash entertainment. I have a real fascination with this kind of sordid material. Nicholas Cage plays a private detective, Tom Welles, hired by a wealthy widow to investigate a tape she found in her deceased husband’s safe. The tape appears to be an authentic snuff film, with a teenage girl as the star and victim. The widow wants Welles to investigate if the snuff film is real by finding out what happened to the girl in the video. Welles accepts the case and begins his descent into the world of underground pornography to find the truth. A few years after Seven, 8mm lacks the skill of that classic, but succeeds on the ability of its subject to engross and thrill. Cage, over-the-top at moments, delivers as the film’s wearied protagonist. Phoenix and Morton ground the film, and give it some pathos.