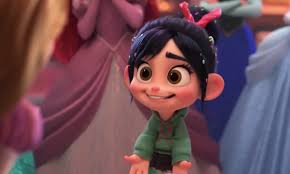 There are some nice ideas in Ralph Breaks the Internet, sequel to 2012’s Wreck-it-Ralph. It explores friendship, insecurity, and visually articulates what it might look like inside the internet in an appealing way. However, for all of its cleverness, there aren’t many laughs to be found, and the story never pulled me in completely at any point. This new Ralph resembles Homer’s Odyssey in structure: kind of wandering, with no apparent villain, and slow to reach its point. I was slightly bored for much of the running time. The plot is rather simple: Vanellope (Silverman) and the gang at Sugar Rush are in danger of becoming homeless as their game is close to being shut down. Their only hope is that the arcade set gets a new wheel to replace the broken one, so the game can go on, and the only way to get a new wheel is for Ralph and Vanellope to enter the internet and find one. There’s not a lack of action. Plenty happens. The animation is vibrant. I just never truly cared.