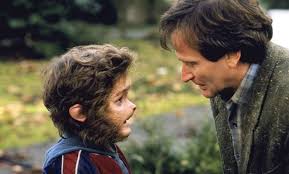 Sometimes it’s impossible to separate the actual quality of a film from the nostalgia it produces. Jumanji is a childhood favorite. In 1969, a boy, Alan, and a girl, Sarah, sit down to play a mysterious board game that promises fun and excitement. The game turns out to be all too real, conjuring up a new jungle threat with every role of the dice. An especially unlucky roll lands Alan in isolation, keeping the two from finishing. Nearing thirty years later, two new kids, Judy and Peter, find and join the game. At the time, some critics complained about Jumanji being too scary. Kids like to be scared. Jumanji is the proper amount of scary in controlled doses. Williams makes for a nice hero with what’s actually a somewhat limited amount of screen time. Hunt, too, is engaging as the childhood crush grown up.