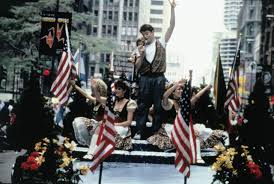 Ferris Bueller is slightly arrogant and spoiled. He complains at one point that he asked his parents for a car, and instead received a computer. If this film was solely about him skipping school, and gallivanting in the great city of Chicago, I’m not sure anybody would care. It might still work as a light comedy, but I doubt it would resonate beyond that, or endure as it has, now 32 years later. Ferris Bueller is about a free spirit helping his friend enjoy life. The free spirit is obviously Ferris, played wonderfully by Broderick, and the uptight, hypochondriac friend, Cameron, is played by Alan Ruck. They, along with Ferris Bueller’s girlfriend, Sloane, have a spectacular day, while the authority figures, led by Principal Rooney (Jones), and forces of banality, led by Ferris’ sister (Grey), attempt to thwart him. So many memorable, funny moments, but the standout is, of course, Ben Stein’s painfully boring lecture. Jeffrey Jones, resembling an old Wile E. Coyote cartoon, with Ferris being the Road Runner, is excellent.