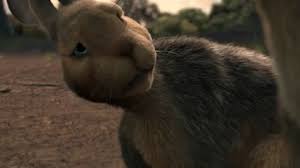 The incredible fantasy adventure novel, Watership Down, by Richard Adams, about a group of rabbits on an exodus gets a reworking in this BBC led production. I was all for it. Though the 1978 film adaptation is marvelous, let’s see what an updated, CGI miniseries with a first-rate voice cast can do with the material. The result is disappointing. The voice cast is first-rate, and do excellent work, but the animation lets them, and, ultimately, the story down. It’s surprisingly shoddy, lifeless work for such a prestigious production. It’s often difficult to distinguish between characters, and the picturesque beauty from the 1978 film is absent here. I also didn’t care for the “minor” changes to the story. Mainly, my favorite character in the novel, Bigwig, is made less likable by constant grousing early on. Finally, the story, which is still gripping, manages to push through and make this miniseries at least worthy of one viewing.