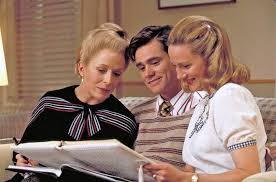 Thoughtful, prescient film about a man, Truman (Carrey), who lives his life in a fish tank, unwittingly the star of an elaborate reality television series. The film follows his slow realization that nothing-not his wife, not his family, nor his friends-in his life is real and his subsequent attempts to escape.An interesting premise, in this case, yields a film that seems more relevant today than when it was released twenty years ago. Jim Carrey showcases his dramatic chops, and makes a wonderful hero.