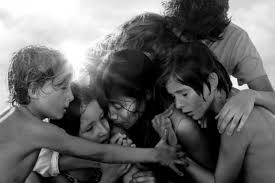 I’m not sure I’ve seen Mexico like this, the way it’s shown in Oscar-winning director, Alfonso Cuarón’s, newest film. Roma portrays the life of a young maid, Cleo, who works for a well-to-do family in the upper class, Colonia Roma neighborhood of Mexico City during the early ’70s. We see conflict at three separate levels: Cleo gets pregnant by a true bastard, who discards her and joins a paramilitary group, her employers’ marriage is strained, and eventually the husband leaves, and then, finally, the city itself endures a torrent of political violence. As dramatic as this all sounds, Roma is often a very quiet, languid piece, with stunning camerawork and a beautiful aesthetic. There’s also a strong sense of love and family present even at its saddest moments. That being said, I was more impressed by individual details of Roma then moved by it.