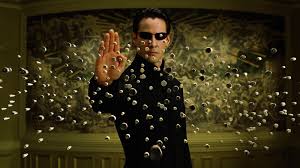 Thomas Anderson (Reeves) follows a series of puzzling messages that lead him to Morpheus (Fishburne) and the rest of his crew, as they explain the Matrix. This film blew most of us away back in 1999. It blends cutting-edge special effects, a diverse array of philosophies, martial arts, and the cyberpunk subgenre into a mainstream action flick. I honestly would have described it as mind-blowing back in the day.  Time and the criminally disappointing sequels may have dimmed its appeal slightly, but not too seriously. It’s still cool as hell, still provocative, still exciting, and I will forever love Neo, Trinity, and Morpheus. Hugo Weaving gives an indelible performance as the evil Mr. Smith. It’s a confusing concept this film builds around, but rewarding, at least in this installment.