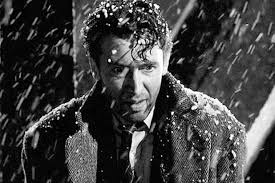 Clarence (Travers), an angel 2nd class, is given an awfully tough assignment: selfless, devoted family man, George Bailey (Stewart) of Bedford Falls, wonders if the world would be a better place if he was never born. Clarence gives George a glimpse of what that would look like. The quintessential Christmas standard, It’s a Wonderful Life is the best of Christmas movies for any lover of classic Hollywoood. James Stewart and Frank Capra were an awesome pair, and I’m not sure any one has looked more beautiful in a film than Donna Reed when she and Stewart huddle around a phone, trying to stay angry at one another. I’ve mentioned before people’s tendency to forgive overt sentimentality in older films. In fact, it’s what people love most about films like It’s a Wonderful Life. George Bailey’s life isn’t easy, or what he dreamed for himself, but in the end, he’s given the gift of seeing that he has a purpose. Aside: Like any true traditionalist, I prefer this film in black and white.