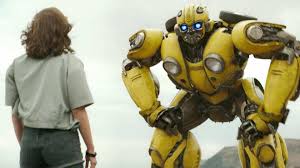 I was pleasantly surprised. It’s possible that I’ve never been more surprised to find myself enjoying a movie, as I did with Bumblebee, the newest installment of the Transformers series, a franchise I’d long since stopped caring about. Set in the 1980s, a source of much fun for the film, Charlie Watson (played wonderfully by the engaging Steinfeld) is still grieving the death of her father when young autobot, B-127, enters her life. B-127’s mission is to scout out Earth for the Autobots as they attempt to regroup and fight back against the evil Decepticons. I don’t especially care about the grand plot involving the Transformers. Fortunately, this film plays more like an ’80s monster friendship comedy. Think E.T or Little Monster or even ’90s classic The Iron Giant. Bumblebee belongs in their company. It’s a fantastic flick, directed by Travis Knight, who’d previously worked in animation for Laika studios.