Tim Allen was on top of the world in 1994. Hit television show, hit book, and hit movie; the latter being The Santa Clause, my 11th film for my Christmas film challenge. This is an intermediate film for me. It’s a Christmas movie I’ve seen numerous times, enjoy very much, but don’t love. That’s no great indictment. It’s a hopeful film with a definite sense of Christmas cheer, good spirit, and a strong message. It’s an ideal family Christmas movie. 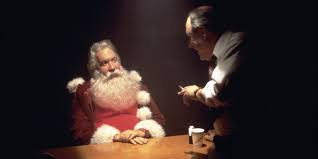 Tim Allen plays Scott Calvin, a mildly cynical, divorced father whose son, Charlie, would rather spend Christmas eve with his mother. Despite his wish, Charlie spends Christmas eve eating at Denny’s with his Dad looking around at a bunch of other unhappy children eating with their dads, but things pick up later that night. Investigating a noise coming from the roof, Scott accidentally kills Santa Clause. Not as dark as it sounds, this necessitates that Scott become the new Santa. Charlie and he finish the Christmas presents circulation, and are told the deal by an elf named Bernard once they arrive at the North Pole. Scott can return home to put his affairs in order, but starting next year, he’s full-time Santa. Naturally, Charlie is overjoyed. Scott is less enthusiastic. In fact, he’s convinced when he awakes in his own bed the next morning that the whole episode was a dream. This explanation becomes less likely once he physically begins to transform. This is one of The Santa Clause’s best moments as Scott goes through a less scary, more humorous metamorphosis than Jeff Goldblum in The Fly. The last third isn’t as much fun as it drives home the sugar and syrup.

The Santa Clause is a  fine Christmas film. It’s relatively witty, with a host of fresh ideas, and a nice message about faith and family.