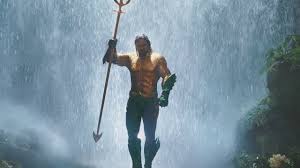 “Not Orm. Ocean Master” So says Patrick Wilson’s character, the villain of the piece. The general consensus about Aquaman seems to be that it’s “cheesy fun.” I love cheesy fun movies. Remember I liked Venom. Aquaman is bad. I can’t get over the fact that it’s about grown men riding on dolphins. It’s so dumb. Jason Momoa gets his first solo adventure following the woeful Justice League, as the titular hero, Aquaman. He can dwell on land or in water (not unlike a turtle), and can communicate with sea creatures. In the secret underwater world of Atlantis, his half-brother, the evil Orm, later “Ocean Master” (eye roll) plots an attack on land dwellers. Arthur teams up with Princess Mera to find the trident from Little Mermaid that will prove he’s the rightful king of Atlantis. I became bored of this fairly early on, and never recovered. There are moments of vibrant color (not unlike a child’s artwork), but many more of poor jokes, and pseudo-serious lines of villainy. James Wan has made so many good films before this-The Conjuring, Fast and the Furious 7- Aquaman doesn’t belong with those movies. The opening resembles 1984’s Splash minus Tom Hanks, and who wants that?