Every few years or so, you’ll see something of a high-concept Christmas flick hit theaters. The Santa Claus (1994) is probably the most successful example. They take the conventions or the mythology behind Christmas and attempt to put a new spin on it. Arthur Christmas is such a film. I saw it seven years ago during its original release, in theaters, and rewatched it this week as part of my Christmas film challenge. 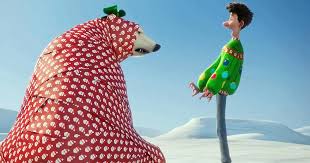 Arthur Christmas imagines the behind-the-scenes workings of Santa Claus as a family-run, multi-generational operation: Malcolm, the father, Margaret, the mother, Steven the oldest son, and Arthur the second son. There’s also the slightly loopy Grandsanta (voiced by Bill Nighy).  Malcolm (voiced by Jim Broadbent), the current “Santa Claus,” is more of a figurehead than a leader. It’s his oldest son, Steven (voiced by Hugh Laurie), who runs most of the day-to-day operations, oversees the presents, and sets up a bevvy of cutting-edge technology to make Christmas more efficient than ever before. Steven’s ready to take over as Santa Claus. Malcolm has been considering retiring for years now, and the entire family anticipates him turning things over to his oldest son, but Christmas eve comes, and Malcolm announces that he’ll continue on. Steven is irate. Worse still, it seems that some child’s present slipped through the cracks, and wasn’t delivered. The only person who shows much concern is Arthur (voiced by James McAvoy), the well-meaning, but often in the way Claus. He sets out to deliver the present with only the help of similarly looked-over elf, Bryony, and Grandsanta, who has ulterior motives.

Arthur Christmas is appealing, clever, and wonderfully animated, as is the case with all of Aardman’s productions. I do think it’s a bit iconoclastic in that Santa looks like an incompetent jerk for most of the movie. I wonder how that plays over with kids. That aside, it’s a good film, and worthy of making its way into your Christmas flick rotation.