Filmmaker Chris Columbus is a slave to sentimentality and not much concerned with the visual aspect of  filmmaking. Despite his limitations, he’s responsible for some fantastic films: Gremlins, Adventures in Babysitting, Little Nemo: Adventures in Slumberland,  Home Alone, Mrs. Doubtfire, the first two Harry Potters. His newest film, which he produces, is The Christmas Chronicles, written by Matt Lieberman, directed by Clay Kaytis. It’s a solid production, and very likely the best Christmas movie made exclusively for Netflix yet. I’ve worked my way through the streaming service’s catalog of Christmas films, and they are all decent, good-spirited adventures, but the Christmas Chronicles is the only one with any sense of broader appeal. The fun for all ages slogan is mostly true here. 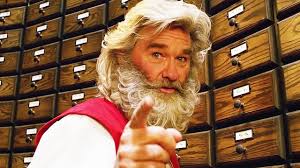 The Christmas Chronicles begins with memories of the good times the Pierce family have shared during past Christmas seasons. As we catch up to the present, we see that the father, Doug (Oliver Hudson), has died (in the line of duty as a fireman), and the rest of the family is struggling to adjust: the mom, Claire (Kimberly Williams-Paisley),  works full-time as a nurse, and hardly has time to spend with her kids, 10-year-old daughter, Kate, is constantly getting in fights with her older brother, Teddy, who’s become a delinquent since his father’s death. It’s not an altogether original premise, but still proves effective. When Kate catches Teddy stealing a car with a group of his new criminal friends on camera (she’s an avid filmer), she blackmails him into helping her get an image of Santa Claus on tape, to prove he’s real, as Christmas Eve approaches. They wind up causing Santa Claus (Kurt Russell) a heap of trouble, and to atone, they work to help him get Christmas back on track so that he can deliver each present on time.

The real attraction is the headliner, Kurt Russell, and he makes for a wonderful Santa Claus. He’s boisterous, rowdy, fun, and versatile enough to move between comedy and some of the later dramatic moments with ease. I’d love to see him return to this role for another adventure. The children’s story is standard in many ways, but it’s mostly an excuse to get to the film’s more creative ideas: Kurt Russell’s take on the character and the elves.

Netflix has yet to put out a masterpiece (though I haven’t seen Roma yet), and The Christmas Chronicles isn’t one, but it is an entertaining holiday film for the family. There’s a cameo at the end of the film, that is entirely predictable, but very much welcome.