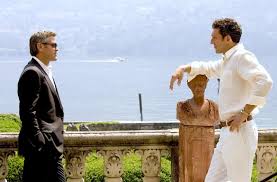 The setup is solid. Terry Benedict (Garcia) tracks down all of the Ocean’s 11, and demands his money back, with interest, or else. They’re forced into another grand heist. I can see how easy it would have been for the writers, stars, and filmmakers behind Ocean’s 12 to be lazy; to drift through the production and let the immense star power, beautiful locations, and hip soundtrack do all the work. Some critics feel that that’s what they did. I don’t. Ocean’s 12 is not as good as the first one. It’s not as cool, not as clever. It’s also lacking some of the antagonism Garcia provided that amplified the suspense- though he is in this film as well, and Cassell makes for a credible foe- but Ocean’s 12 still bears a lot of style, and it’s still a lot of fun. Zeta-Jones as an Interpol agent and Rusty’s (Pitt) former girlfriend is an entertaining wrinkle. The meta-humor of “Tess” (Roberts) pretending to be Julia Roberts provides some laughs, but it’s too ludicrous to be exciting.