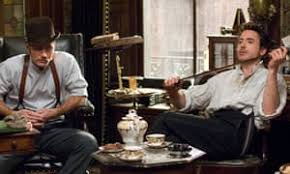 Solutions are never as fun as the setups in Sherlock Holmes’ stories. Like magic tricks, once explained, the tricks lose most of their interest. That’s the case once again, here, in Guy Ritchie’s take on the Sherlock Holmes series with Robert Downey Jr. as Holmes and Jude Law as Watson. That being said, this is an excellent Holmes’ adventure and the reveal is about the only disappointment. I had low expectations when this film first came out. A frenetic, action-packed Holmes’ movie sounded hack, but I was proven wrong. It’s a fresh take that does have trumped up action sequences but not at the expense of Sherlock’s deductive skills, witty banter, or the storied bromance between the hero and his best friend, Watson. Downey Jr. and Jude Law are both excellent in their respective roles, and the premise is an intriguing one. A captured cult leader is executed, but appears to have returned from the dead. Very entertaining film.