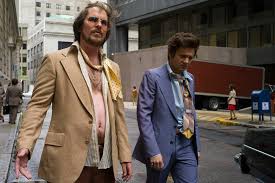 “Don’t tell me this movie is about human nature, because it’s not; it’s about acting.” Roger Ebert was talking about the Pope of Greenwhich Village when he said that, which happens to be another film about con artists in ethnic New York. I believe it applies here as well. Christian Bale, once again, sports an exorbitant weight gain, as well as a hilariously atrocious comb-over, while playing Irving Rosenfeld, a small-time con artist who’s forced to go big alongside the feds to escape a prison sentence for his mistress and partner, Sydney (Adams). He’s coerced by a dumb steamroller of an FBI agent, Richie DiMaso (Cooper), into roping in several key political figures, one of whom Irving befriends, Carmine Polito (Renner). This film is serious fun; the energy, the style, David O. Russell’s ability to capture magic from his performers, the air of improvisation that every scene has (whether it was or not, I don’t know). Typical of his work, American Hustle feels over-the-top- each character and performance is very big- but more than previous films, it bothered me a bit here.