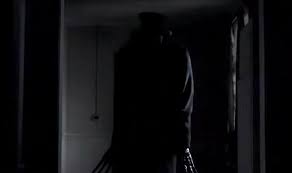 Acclaimed by critics, I found The Babadook exceptionally tame. A widow, Amelia (Davis), seems at the end of her rope raising her bizarre six-year-old son, Samuel (Wiseman), by herself. Samuel is obsessed with monsters, and one in particular, The Babadook, but soon Amelia starts seeing The Babadook too, and Samuel’s the one afraid. What stands out are the tremendous lead performances by mother and son. They run the full scale of emotion in this film as their characters devolve, and play each note convincingly. I was less impressed by The Babadook itself. This isn’t meant to be a horror franchise, and as such, the film’s monster wasn’t supposed to be this unforgettable icon of horror. The Babadook lives in the shadows, and stays in the shadows, but I can’t put my finger on any subtext needed to make this horror classic. The story at its most horrific parallels a son watching his mother deal with mental illness.