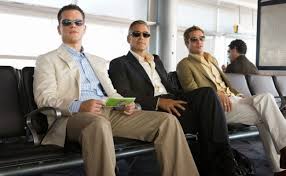 A remake that’s better than the original, Ocean’s 11 stars George Clooney as the recently paroled, Danny Ocean. Far from reformed, he plans his biggest heist yet with the help of his partner, Rusty (Pitt), and 9 other specialists to take down a Las Vegas casino, but it’s not just about the money this time. The slick, ruthless owner of the casino, Terry Benedict (Garcia), is dating Danny’s ex-wife, Tess (Roberts). The whole film, heist included, works like gangbusters, and all the words that have become hackneyed in describing a crime flick-slick, stylish, etc.-are apt here. The dialogue in particular is excellent; snappy, humorous. The villain, as played by Garcia, is a worthy adversary, something missing from Ocean’s 8, and raises the stakes and the suspense of the operation. In a film like this, there’s not going to be much character development, so heavy star power is needed. Clooney effortlessly pulls off the detached coolness.