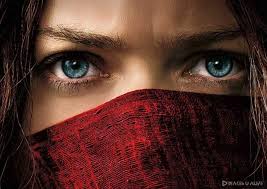 Alas, this is not a live-action remake of Howl’s Moving Castle, but, thankfully, it’s not a complete waste of time as I once feared either. In fact, I was reasonably entertained for most of the film. Mortal Engines, based on a YA science fiction novel, is set in a post-apocalyptic, steam punk world, where cities have been motorized. The two main characters are thrust together once Tom (Sheehan), a bright young historian, living in mechanized London, stops Hester Shaw (a mysterious young girl on a mission of revenge) from assassinating Thaddeus Valentine (Weaving), something of a leader in this new world. The plot is a bit simple and easy to drift off from, but the special effects are solid and the actors are solid. There’s nothing exceptional about the film, but nothing terrible either. I enjoyed it.