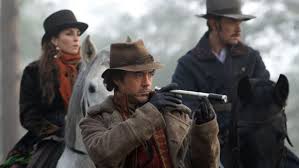 Robert Downey Jr. returns to his other film franchise along with Jude Law as the famed detective, Sherlock Holmes, and his loyal partner, Dr. Watson, respectively. This time around, it’s 1891, and Sherlock is facing his greatest nemesis, the equally brilliant, villainous, Professor Moriarty (played to sinister perfection by Jared Harris). It’s an impressive accomplishment that for all this film’s action and noise, it does one of the best jobs of any Sherlock film to convincingly portray not just its protagonist but Moriarty as a genius. That’s a credit to both Downey Jr. and Harris. The action sequences are elaborate and bombastic, which I never thought would work with Sherlock Holmes. The first film showed me otherwise, and this sequel’s better.