For my seventh film on my quest to watch 25 Christmas movies before Christmas day, I watched The Princess Switch. It’s also the third Netflix original movie I’ve watched during this challenge; A Christmas Prince and Christmas Inheritance being the first two. It’s nearly impossible to distinguish which of the three is superior. They are all par for the course. Sweet, competent, bright, warm, reliable, fairy tale, happy endings, family-friendly entertainment. Absolutely nothing wrong with that. Apparently, there is a sizable audience for these films, since they keep making them. A Christmas Prince even has a sequel Netflix just released. I’ll probably watch it before my challenge is through. But back to The Princess Switch. It feels very much like a direct descendant of A Christmas Prince. A nice, pretty girl, not royalty, has a whirlwind romance with a Prince of a made-up country over Christmas. In fact, there’s a scene in this film of the main characters watching A Christmas Prince. 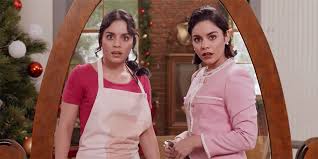 Vanessa Hudgens plays Margaret, a talented baker, who struggles to do anything spontaneously. After an awkward meeting with an ex-boyfriend, she caves in and takes her best friend, Kevin’s advice: a holiday trip to Belgravia where a prestigious bakery competition is held. Margaret goes with Kevin and his daughter, Olivia, but, once there, in what is, of course, a picturesque location, she gets separated from them, and meets Duchess of Montenaro, Stacy DeNovo. I’m never going to stop asking why the people from made-up countries always have British accents, because, once again here, they do. The Duchess, also played by Hudgens, is apprehensive about her upcoming arranged marriage to the Prince, whom she’s met a handful of times. She’d prefer to be an average woman. The Parent Trap or The Prisoner of Zenda are invoked. Margaret and Stacey switch places, fall in love with their respective leading men, and a small dilemma forms, then quickly gets sorted out. It’s that kind of movie, which we already knew going in, and are likely fine with. This is a perfectly satisfying piece of entertainment that will appeal to its audience. No Christmas classic, but fine Christmas time-waster.

I decided to leave Vanessa Hudgens’ “British” accent alone, then changed my mind.