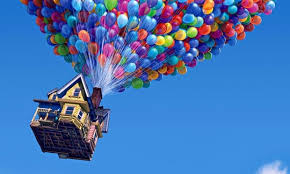 Films featuring elderly protagonists are few and far between, and animated films featuring elderly protagonists are pretty much non-existant, outside of Pixar’s 2009 offering, Up (Sophie in Howl’s Moving Castle was a young woman cursed with an old woman’s body). Up is a combination of a lot of unique, inspired ideas- a house flying across the world, balloons holding it up, a dog that can talk, a boy ranger sidekick-but at its heart, the best aspect of the film, is a regretful widower fulfilling a promise he made to his wife. The opening sequence covers our hero, Carl, and his wife, Ellie, all the way from their first meeting as precocious children to their final moments together as she dies in a hospital. It’s an incredibly moving scene, but unfortunately the rest of the film isn’t at the same level. Carl and Russell’s adventure are vivid and beautiful, but aren’t as interesting as the opening act. Their exploits in Paradise Falls drag a bit.