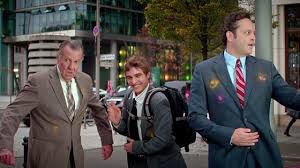 Somewhere buried in this middling raunchy comedy lies what could have been an excellent tragicomedy. Vince Vaughn plays Dan Trunkman, a middle-aged American businessman who walks out of his dead end job to strike out on his own. Starting a company with Tim (Wilkinson), a retirement age assistant, and Mike Pancake (Franco), who seems to be mentally handicapped,  Dan reaches the point of desperation. He needs to make a big sell or he’ll have to tell his wife that he can’t afford private school for his bullied, overweight son. Much of the premise for Unfinished Business is very interesting, and Vaughn, less mannered (though I’m a fan of his comic persona), is very good here in a more serious than usual role. The broad comedy aspects don’t work and severely limit the film. The whole Mike Pancake character, for example, is beyond believability and doesn’t match the rest of the film’s tone. I also would have preferred a less triumphant, pat ending. Oh well.