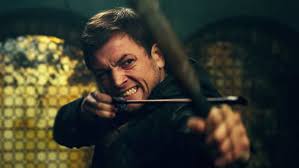 Robin Hood’s back. He wasn’t gone for long. It’s been just 8 years since the last big-budget Robin Hood adventure starring Russell Crowe and Cate Blanchett. This reboot stars Taran Edgerton as the famed crusader who steals from the rich and gives to the poor of Nottingham during King John’s reign. Jamie Foxx plays Little John, or actually just John, an anglicized version of his Muslim name; just one of the odd choices the filmmakers made in their storytelling. The sheriff of Nottingham (Mendelsohn) taxes the people beyond their means to fund his plot to take control of the country, and only Robin can stop him. Borrowing heavily from Zorro or the Batman myth, Robin plays up to the Sheriff, pretending to be a snooty aristocrat, while moonlighting as a vigilante. Guy Ritchie’s Sherlock Holmes films also seem to be an inspiration. The bottom line is it’s just not very good. It’s not incompetent, and Mendelsohn is a compelling villain (as he’s shown in countless movies now), but the new Robin Hood simply makes me miss Errol Flynn’s Robin Hood. The color, the fun, the romance. All things missing from this outing. The first act largely follows the failed crusades in the middle east, and I’m baffled that the filmmakers thought this would be appealing. Immediately Robin Hood becomes a dull affair. This is Robin Hood, not The Hurt Locker. Fortunately, the second act picks up a little, but not enough to make this a good film. It’s also almost entirely humorless.