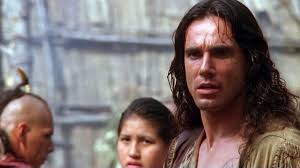 The Last of the Mohicans is an expertly crafted epic and a truly rare adaptation that is better than its source material. Telling the story of Hawkeye (Day-Lewis), white adopted child of Chingachgook (Means), the last of a dying tribe of Mohicans, who, like other Indians, gets caught in the struggle between the French and the British during the French-Indian War. Hawkeye, his father, and brother rescue the Munro sisters, Cora (Stowe) and Alice (May), daughters of Edmund Munro, a British Colonel, who have the embittered Magua (Studi) chasing them with unknown motives. A big reason this film overcomes whatever inherent silliness goes with the plot is the authenticity the actors and technicians achieve, and the respect given to each character. Magua is not only a terrifying villain, but also a sympathetic one. Studi is excellent in the role. Day-lewis is considered by many to be an all-time great actor, and here, he makes the ridiculous character of Hawkeye a fierce and stoic hero to root for. Stowe is gorgeous and a worthy object of his affections. This is, in the end, an epic romance; a lovely fantasy with war as a backdrop.