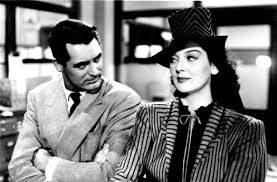 Perhaps the most famous of screwball comedies, His Girl Friday, directed by Hollywood master, Howard Hawks, stars Cary Grant and a never-better, beauty and brains, Rosalind Russell. She plays Hildy Johnson, an ace reporter giving it all up to marry kind, stable Bruce (Bellamy), an insurance agent. First, she needs to secure a divorce from her husband and former boss, Walter (Grant), the double-dealing editor of a New York newspaper. She knows it won’t be easy. Walter always has something up his sleeve, and he’s not ready to give her up. Similar to an earlier screwball classic, The Awful Truth, in romantic setup and leads (both Grant and Bellamy were great in it), I prefer The Awful Truth. His Girl Friday starts off with a bang, a fantastic Act 1, but loses steam, and drags a bit in the second act. One thing I do love about the film is the background actors, their authentic reactions and interplay. It makes the whole thing seem like a live glimpse at depression era journalism.