Brad (played by Vince Vaughn) and Kate (Reese Witherspoon) live a very comfortable life together. Their friends don’t understand why the two don’t get married, but Brad and Kate don’t understand why they should. They both come from family dysfunction, which is why, every Christmas, they tell their parents that they are caught up in some sort of charity work, and won’t be able to make it home. In reality, they spend their Christmases living it up in some resort paradise, and this year, they’re heading for Fiji. Their plans get derailed, their ruse is revealed, and all of the sudden, a stress-free Christmas vacation in Fiji turns into a mad-dash to visit 4 separate parents (both sets of parents are divorced) over the space of one Christmas day. Brad’s parents are played by Robert Duvall and Sissy Spaceck, while Kate’s parents are played by Jon Voigt and Mary Steenburgen. 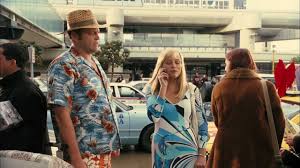 Eschewing traditional sentiment, Four Christmases reveals early on, that this is a comedy; a lewd, edgy, unsophisticated comedy. There have been a few stabs at merging this kind of comedy with the Christmas season. Some have been flops (Surviving Christmas), most have been passably mediocre (The Night Before), with the one real success being Bad Santa, the golden standard. Four Christmases is more in the passably mediocre section.

Holiday classic, this is not. It misses the “heart” portion of humor and heart. It’s laughter with no tears. It doesn’t take Christmas very seriously, and if you are going to do that, the film needs to be hilarious to make any lasting impression. Four Christmases made me laugh every now and then. The Nativity play scene was quite funny. Vince Vaughn is a funny guy, but it falls short of dark comedy Christmas classic.